I Should Probably Be Offended By This

But mostly I’m amused. I haven’t been able to do much with my blog for the last few months because of life stuff. Consequently, view counts of my blog have varied depending on the day, if I’ve posted other places on the Net, etc. (Spambots do not find your blog unless you post new entries, you see.) 🙂 But they’ve still been in the average range for my little fledgling blog. Today, however, I discovered that the number of views of my blog had increased 5 times over. Why?

Well, awhile back, talking about the disturbing trend of having photos of women in fashion advertising appearing like stick aliens, including bizarre photoshopping airbrushing,  mostly in terms of puzzling about what exactly is the advertising philosophy behind it, I put up, among other things, a photo of a Victoria’s Secrets model (as an example of the type of modelling today that is still not stick alienish yet.) And Victoria’s Secrets had a “fashion show” infomercial special on U.S. network t.v. last night. And apparently, in the wake of that, there are a lot of people searching for photos of Victoria’s Secret models. And so my blog came up in searches (I can’t imagine it’s very high on the search lists,) and some of the searches — probably mostly spambots programmed for the term Victoria’s Secret — came to my blog. And the ironic thing is that the particular, one Victoria’s Secret model photograph I had put up has been removed from the upload or virused and doesn’t even open on my blog anymore. You can’t actually see it if you come to my blog. It will not successfully gather for Google or whatever it is that is being done. (I did, however, get it originally from Google, so you can just go to Google and get some.)

But it is a very popular search term, apparently. So just for kicks, I’m going to try a little experiment. Here is a Victoria’s Secret model photograph from the 2010 fashion show: 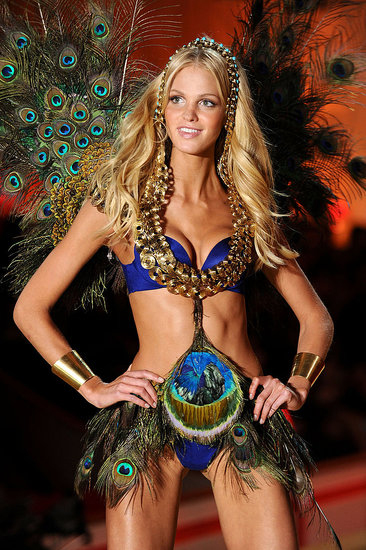 I like this one because I like peacock feathers. Also, she has actual thighs. Let’s see if I can get 8 times more views than my usual average! I’ll keep you posted.

One response to “I Should Probably Be Offended By This”