While my blogging has been sporadic, doesn’t mean I haven’t been reading stuff. Here are three different but related visions of the future:

I became a big fan of Valentine because of her first published novel Mechanique, an absolutely beautifully written book that skillfully blended violent action, steampunk and suspense with meditations on art, love, loss and death. Persona has that Valentine touch but it’s a different type of story with a style that is more straightforward, less poetic, more brainy spy thriller. The novel is set in the near future when technology has advanced in various areas, notably surveillance, and global issues dominate. Countries, including some new ones on the scene, negotiate it out in a fishbowl of diplomats who are mostly just used as celebrities in the world reality show, called Faces. There are official journalists and black market journalists (snaps.) The novel centers on Suyana Sapaki, a third rate Face for the newer United Amazon Rainforest Confederation angling for a better deal for her struggling young country, and secondly on Daniel Park, a former journalist on the run, trying to become a snap, who happens to interrupt a mysterious assassination attempt on Sapaki. Everybody is hiding lots of secrets that are likely to get them killed by one group or another. The paranoia is ramped up to eleven, and it’s wonderful. It’s a crisp, punchy novel about a future that, while a few things might not fully hold up, has some scary parallels to what’s going on today and how they could be worse. I enjoyed it a lot and am looking forward to reading the sequel that came out this year, Icon.

I’ve also been a fan of Chuck Wendig’s Miriam Black series, which are contemporary fantasy thrillers. (He is better known now as the guy who is doing the funky new Star Wars tie-in bestsellers.) In Zeres he turns to science fiction in the contemporary to near future time range. In the novel, the tech involved is of the cyber variety and also has a lot of stuff about surveillance. Wendig sets up the classic hackers story: five disparate types of criminal hackers are grabbed by the U.S. government and forced to work at a secret complex as cyber spies to avoid federal prison for the rest of their lives. And of course there are conspiracies within conspiracies that the thrown together group are forced to deal with in order to survive. But from there, things get weirder and weirder, because that’s how Wendig rolls. He also has a brilliant ability to take a stereotype frame and play with it, turning them into buyable and fleshed out characters, and has interesting side characters as well. While I didn’t enjoy the novel as much as the Miriam Black books, I did very much like the combo of extrapolating where cybernetics might go with Dirty Dozen face-offs and chases. There is a sequel/spin-off that involves ants just out called Invasive. I don’t even want to think what Wendig might do with ants. 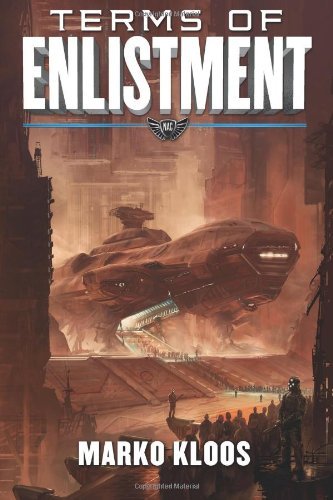 Everybody started talking about newcomer Marko Kloos and so I got around to reading his first novel, the start of the Frontline series. The novel is set in a farther away future that is bleakly dystopian. The Earth is overpopulated, trashed and food shorted, with tons of poor folk kept trapped in giant city camps — pretty much a standard scenario. Some try to escape it by joining the military, with the hopes that if you survive service, you’ll get a pension and maybe the ability to settle on more breathable colonies out on other planets. That’s what the novel’s protagonist, Andrew Grayson, decides to do. The tech here is military, also involves methods of surveillance, and some of it is interesting. The novel is really two stories together. The first involves Grayson’s training and service on Earth where they put down “threats” both foreign and domestic as hated enforcers. The second part has Grayson going up into space on a military patrol vessel that encounters a totally new threat to humans. Kloos makes a bit of a first-timers mistake in the first part, for me, of believing that detailed descriptions of military training and procedures are both fascinating and totally unfamiliar to his reading audience. So the first part doesn’t move along quite as well as the second part, though it gets more exciting as it goes. The second part of the novel offers us more of a new world, better pacing and Kloos’ aliens are neat. Overall, it’s a bit of an uneven book that is nonetheless free of bombast, has lots of action and knows its military hardware. And has a protagonist who isn’t a total saint but does have a strong emotional core. So I’m interested to read the next one in the series and see what Kloos does with his wider landscape.

That Was a Summer That Was

So I had another gap, because family stuff this summer got a bit crazy. Not always in a bad way, mind, and I got to go on vacation, which was 95% part pleasant (I may have gotten a little food poisoned.) And returned to Trump and white supremacists parading around, and the fainter echo of bigoted nonsense going on with planning for the World Fantasy Convention and at the recent WorldCon. (The good news being that MidCon II, which hosted WorldCon, apparently rocked at announcing and enforcing their code of conduct, having access for all, and generally prepping stuff. Which is really quite a bit of progress. And was achieved by people being pushy, loud and undeterred about bringing up the issue so that people couldn’t pretend it wasn’t an issue anymore.)

But I really, really don’t want to spend all my days ranting about this stuff. (Although I did some ranting at Whatever and Jim Hines’ blog if you want to go read that.) So next post will be about books. In the meantime, enjoy Scott Bakula being totally silly in a Quantum Leap sketch with Stephen Colbert on Colbert’s show:

(I just remembered the sketch makes a lot of fun of Trump with a very good kid actor. Oh well, but it’s not me specifically ranting. Technicality counts.)