We Will Miss You Ursula Le Guin

So we got the sad news that author Ursula Le Guin passed away at the age of 88.

Le Guin was the only woman and the last of the SF Lions, the authors considered the most monumental, seminal voices in modern SF whose name every fan knew, along with Isaac Asimov, Arthur C. Clarke, Robert Heinlein and Ray Bradbury. A thoughtful professor married to a professor who supported her writing, a brilliant speaker and an advocate and inspiration for numerous writers, her impressive body of work from 1962 right up until her death made her an icon. Her major best-selling fiction works like The Left Hand of Darkness, The Dispossessed, The Lathe of Heaven, Lavinia, “The Word for World is Forrest,” “The Ones Who Walk Away from Omelas,” and “Vaster than Empires and More Slow,” are staples of school curriculum and winners of multiple awards, including five Hugos and six Nebulas. They explore remarkably what it means to be human. Her fantasy Earthsea trilogy, written for teens, has become a core text of epic fantasy and coming of age literature. The series won a World Fantasy Award, the prestigious Newberry Honor Award and the National Book Award for Children’s Literature. It was the first of many works Le Guin would write for teens and children.

Le Guin became the leading name in a literary movement of women authors eventually dubbed Feminist SF, which helped open the way for so many women writers in the SFF field, even as she took some sexist heat for exploring such themes in some of her work. She used LGBTQ characters and non-white characters in some of her works and supported authors in both of those demographics in bigger roles in SFF. Beloved by fellow academics, she gently schooled those with misconceptions about SFF literature and dismissed with polished acerbity her own editors and others’ claims that her works or others transcended SFF to be literature instead of simply were literature as SFF. In 2014, she was awarded the National Book Foundation Medal for Distinguished Contribution to American Letters. She was made a Grandmaster of Science Fiction in 2003. The U.S. Library of Congress designated her one of their Living Legends.

Le Guin also wrote non-fiction on writing, SFF literature and her own career, many of which have continued to inspire and influence many fiction writers. Her last publication in 2017 was the collection of non-fiction essays No Time to Spare: Thinking About What Matters, a fitting one to end on perhaps. She represented for so many what was possible, with intelligence, curiosity and a wonderful command of the language. She was known all over the world.

There is a word in our language that, for me, best describes her: nonpareil — someone who has no equal. That was Ursula Le Guin, and we will miss her.

“Love doesn’t just sit there, like a stone, it has to be made, like bread; remade all the time, made new.” — from The Lathe of Heaven

“No, I don’t mean love, when I say patriotism. I mean fear. The fear of the other. And its expressions are political, not poetical: hate, rivalry, aggression. It grows in us, that fear.” – from The Left Hand of Darkness

“We are volcanoes. When we women offer our experience as our truth, as human truth, all the maps change. There are new mountains.”

“We live in capitalism. Its power seems inescapable. So did the divine right of kings. Any human power can be resisted and changed by human beings. Resistance and change often begin in art, and very often in our art, the art of words.”

“I think hard times are coming…We will need writers who can remember freedom. Poets, visionaries—the realists of a larger reality.” 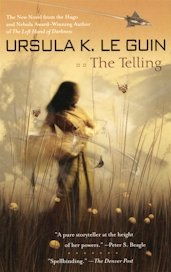 Artist Natasha Alterici put out that she has slots available for up-coming commissions in February. Her stuff seems pretty good so check her out if you are looking for a cover artist or other artistic needs:

Lookee what I got over the holidays:

When people want to know what I want as gifts, usually I say books, so this was my most recent haul. Most of these are continuations of series I’ve been reading, but I also got three new works, including two from authors I haven’t read before.

I’m looking forward to reading through them over the next few months. The cover art on all of them is really good and quite varied in approach. There wasn’t really a theme to this year’s haul selection, other than a “let’s kill off some of the trilogies” approach and some “oh look, a new book in the series” selections. But I did end up with a fair amount of SF and contemporary-styled fantasy titles as a result. There is a whole other queue of titles that will be the gift selections for later and that are a fairly wide range. For the two new authors, Kat Howard and Fonda Lee, both of these novels have been much talked about in fandom and both sounded interesting to me. Once I’ve read them all, I’ll let you know what I think of them. Feel free to share any works you got for the winter solstice/new year.

If you want to check out these authors and their works further, links to their official websites are provided below:

Hello Interwebs! Welcome new Open Window Followers! I applaud your optimism, given that it has been some time since I posted anything in my blog. A lot happened this fall, in the world and for me personally. Including my house springing four different mysterious leaks and entering renovation chaos, followed by family travel and family medical emergencies. So while I managed to natter a few times on other people’s blogs and at SFFWorld.com, I was pretty much MIA by the end part of the year.

I do have plans for this year and for the blog, (don’t I always.) There will be a “Woman in Film” feature shortly, though I’m giving it a new name that may or may not discourage the particular kinds of spam I’ve been getting lately for those posts. 🙂 There will be book info. There will be a links retrospective, because I did collect links on things and articles of interest to me throughout the season regarding publishing and whatnot. There will probably be…cross-referencing. It’s a big, wide open year.

Like most Americans, 2017 became kind of a bizarre year for me, a mix of good and bad, unexpected luck, troublesome misfortune and wild roving anxiety. If you told me in 2016 that I’d have to worry about a nuclear war with little prison camp North Korea, I’d have thought you were way off-base, but here we are. Not everybody made it to 2018, sadly. Those of us who did are surrounded by looting pirates who own multiple yachts. The planet is freezing one slice in the Northeast while the rest of it faces record high temperatures and natural disasters as the wild swings of climate change progress and the Southern Hemisphere goes through a sizzling summer. But it’s still here, people are still moving, stories are still being told, more of them then perhaps ever before.

So we’ll see if we can make it to 2019. Thanks for stopping by sometimes. It keeps me from ranting on street corners. And Happy New Year!