Some Music Tunes to Groove On

First up, the remarkable Jesse L. Martin, backed beautifully by Rick Cosnett and Carlos Valdes, his castmates from The Flash (apparently everybody on that show can sing,) sing a gospel version of the cult show Firefly‘s theme song, “The Ballad of Serenity,” as a thank you to Joss Whedon for making a big donation to Martin’s up-coming folk musical short film, The Letter Carrier:

Next, the trippy nature video for Kate Pierson‘s single “Bring Your Arms” on her solo album Guitars and Microphones:

With similar bursts of color, the hit single “Rule the World” from Walk Off the Earth‘s new album, Sing It All Away:

And lastly, in my tradition of often liking groups that use numbers for their names, new rap/hip-hop group twenty one pilots‘ hit single “Fairly Local“:

Daniel José Older debuted earlier this year with the first full-out novel in his contemporary fantasy Bone Street Rumba series, Half-Resurrection Blues. (Although he’s been of course editing and publishing short fiction, including some novellas set in the universe of Bone Street Rumba.)

Half-Resurrection Blues is about Carlos Delacruz, an in-betweener — a man who has died and been partially resurrected — who can’t remember his past identity, and who has found himself working for the NYC Council of the Dead as an investigator and hunter of ghosts and supernatural beings who are causing trouble between the realms of the living and the dead. (Think kind of Men in Black with ghosts instead of aliens.)

The complication is when the Council mysteriously sends him after a sorcerer trying to open the portal to the deadlands, and that man turns out to be another in-betweener, who may hold a link to Delacruz’s living past. The ripples from that encounter lead to an invasion of supernatural creatures who threaten Delacruz’s friends and to rip the veil between realms. And while he’s dealing with that, Delacruz has got to figure out the puzzle of his violent first death.

Older has a grand time setting up an interesting, cross-cultural supernatural system in the rapidly changing neighborhood of Brooklyn. His characters are sharp and fun, his dialogue really good and he does action scenes well. A lot of urban fantasy series fall back on the snarky. But while there’s a strong thread of humor running through the novel, like a strain of sugar in something tart, Half-Resurrection Blues is more meditative and bluesy, with tragic notes and elements that are horrific even when they are a bit funny. (Carlos also gets beaten up a lot, leaving him less time for zingers.) Carlos is truly a lost soul who has been treading water since his half-resurrection, and his discovery that he’s not the only in-betweener around wakes him up and makes him start figuring out who he wants to be in the half-life he’s caught in. Plus, he has to save the world and as many as he can, of course.

The main quibble I have is a common one for first novels in mystery thriller fantasy series like this. Namely, that the book has to focus on Carlos dealing with personal stuff in the main crisis and building his team of helpers for future stories. That means a bit less time than I would like on the details of the ghost aspects/system and the Council, and on the Brooklyn neighborhoods. Older does spend some time on the latter, but I used to live in that area, long before its many changes today, so that was a factor I enjoyed.

But I suspect that this is a series that is going to do well as people discover it. Older also launched a separate YA novel this year, called Shadowshaper:

That looks really interesting too. I’m very behind on reading YA titles, but I may check it out. Older is beloved by the cover gods, as you can also see by the cover of the second novel in the Bone Street Rumba series, coming out in January, Midnight Taxi Tango: 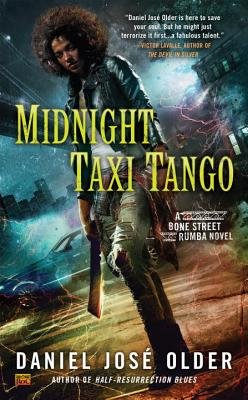 That’s a book that’s going to feature young Kia, who is basically going to be one of the favorite characters in the series of everybody, so I’m probably going to be checking that one out too.

You can check out Older’s website here. He’s also the co-editor, with Rose Fox, of the anthology Long Hidden: Speculative Fiction from the Margins of History, which has been getting a lot of raves and features yet another wonderful cover:

Have some lovely golden presents:

Links to Articles About Writing and Publishing (I Told You I Had Links. So Many Links.)

Here are links to articles on writing and publishing that I found interesting. (Writing neepery, in other words. Much more pleasant than Hugo neepery, really.)

The Internet is full of words, you see. We raised the young people on them.

Kameron Hurley talks about her writing life in the past and the present. Lot of straight financial stuff there.

However, Foz Meadows, who just got a two book deal, does take Chuck to task on there being no rules for writing fiction. (This one’s for you, Andrew! She writes better than I do, but given it’s her blog it was on, she has more curse words.) This is a regular problem — Chuck is a terrific fiction writer, just did the new tie-in novel for Star Wars — but writers, when asked for advice or proferring it, often fall into the form of ordering it to give it a more authoritative bounce. It does more harm than they realize, so I appreciate Foz addressing this.

Chris Brecheen wrote to a woman writer who wanted, get this, J.K. Rowling to retire because she believed it would give other writers a better chance. Brecheen explained how fiction publishing actually works, and that it’s not a competition, which is actually helpful for a wider pool of authors than you might think.

Daniel Jose´ Older offers advice that is also very helpful to a lot of writers dealing with the endless time crunch of life.

Food for thought! Hope all your evenings are warm and safe and welcoming, folks.

During most of the Great Hugo Campaign That Wasn’t that spun out of the “hope we get the conservative media pundits interested” mess that were the Puppies, I was really busy, some good and some bad. I would talk about the situation in various spots when I had the chance, and it certainly made for a particular type of entertainment, but I wasn’t about to try to fully hop in. And now that the Hugos have been handed out for 2015 and the Puppies are trying to figure out how to keep things going while whining about the new Star Wars tie-in novel from Chuck Wendig having a gay protagonist, I’m not inclined to hash things out further. Not specifically about them any-hoo. The more general topic of discrimination, I have some things to say, when I can get to it.

But I do have some links I collected of other people writing about the whole Hugo thing that I thought were informative and cogent over the seven months of deep, deep puppy whining and spitting. So in case you missed them, you can peruse at your leisure:

First up are two pieces by author Kameron Hurley, one for The Atlantic on the situation, and one on her blog about Internet hyperbole re the situation.

Then, there is Amal El-Mohtar‘s take on the Puppies.

Eric Flint, a liberal author who both publishes with and edits for Baen Books, broke apart the Puppies’ claims in this article and its sequel.

And Philip Sandifer‘s angry cultural takedown of the Puppies, which got him his own nickname from them.

Sandy Ryalls on a blog at BlackGate.com commented on the heart of the conflict.

Author K. Tempest Bradford pointed out unintended consequences from the Puppies’ assault on the Hugos.

Author Jim C. Hines took a close look at what the Puppies were actually saying.

M.D. Laclan at FantasyFaction.com looks at the cultural timeline and how both past and future SF does not fit the Puppies’ narrative.

Author and screenwriter David Mack offers a detailed analysis of why Puppy nominee and participant Amanda Green’s essay on his Star Trek novel that she put in her Hugo Fan Writer nominee packet is full of hot air. (This fits with what Green is now trying to do with Chuck Wendig and what the Puppies tried to claim about Star Trek in general.)

Author Tobias Bucknell explains why the image of SFF fandom as a safe place free of attacks like the Puppies’ was always a myth.

Kevin Standlee explains how the Puppies’ mercantile demands show they don’t understand the nature of the Hugo Awards at all.

Cartoonist and writer Barry Deutsch looks at the up-coming Sad Puppies IV for next year and explains why it’s still a voting slate attempt.

And writer and game designer Alexandra Erin wrote several very intelligent pieces about the Puppies and also provided some brilliant satire during the whole ordeal:

“Sad Puppies Book Review: The Monster at the End of this Book”

“The Barker and the Big Tent”

“Interview with a Pratt”

If you do wade through all that, do not despair in the end. The Hugo Awards are fine. And fandom isn’t any more split than it was before. It’s just now those divisions are a bit more out in the open, with the aid of Internet screaming. That’s not, necessarily, a bad thing, although it makes it a little tricky for the publishers. But they could use some shaking up, frankly. They are the ones who have produced a SFF field that is 90% white people, mostly writing about white people.

There’s been a lot of silliness going on today, so you know what that means? Animals! Because serot0nin needs a boost, man.

For instance, is there anything cuter and weirder than baby stingrays?

Did you know that some types of rays can fly?

Drones may be the new tools of the skies, but hawks are unimpressed:

I’m excavating a lot of stuff (so many links,) so in the meantime, have some humorous videos:

Alex Boye, an old-time musician, got together a bunch of his friends to provide their own take on the song and music video for Mark Ronson’s “Up-town Funk” hit, featuring the singing of Bruno Mars:

Comedy group Nacho Punch made a very funny movie trailer for the thriller that is Daylight Saving:

Comic Lauren O’Brien does some spot-on impressions for her video Celebrities Stuck in Traffic:

And an innovative and fun short film imagines what happened to the original Power Rangers, with quite a cast playing the roles (it has a lot of in-series plot points.) It’s called Power/Ranger Unauthorized:

No, I did not bury the blog in a sand-pit so that insects could pick clean its bones. I just had a bit of a summer, is all. To fit the mood, here is a terrific new song by young Canadian Alessia Cara, called “Here”: